First a little background.  My middle daughter Hailey is a stray animal magnet.  She is always bringing home animals she “finds.”  We have had pretty good luck finding the owners, or new homes for all of her finds.  My family jokes around about how much of an animal lover she is and now I know where she got it from.

My husband called me on Friday from his work (he works at one of our city dump sites) and said….”I found a dog, if I leave it he will probably die…what should I do?”  Can you hear the sadness in his voice???  of course I said bring him home and we will find him someplace to live.

He is about a 3-year-old Pomeranian male dog.  He had been caught in a cat trap at the facility and was freezing cold.  He has fur on his head and his legs, but all the hair on his body has fallen out.  And the best part, he has been sprayed by a SKUNK.  So he looks bad and he smells even worse!

Because we have other animals we took him to the local vet before we brought him in the house to make sure he was not sick.  The vet thinks he lost his fur because he had fleas and was probably allergic to them.  So $100 later the fleas are gone, he had a bath to get all the dirt off him and he got a clean bill of health….but he still smells like a skunk.

He has been playing well with our dog and cat and loves to sleep with the kids.  He is very friendly and loves to follow everyone around.  The smell is starting to go away, but the fur has not yet grown back.

He is not the cutest dog, but he has a great face and a great personality…. 🙂

Do you know anyone that would like to give this little doggie some love? 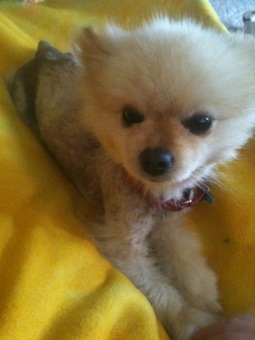 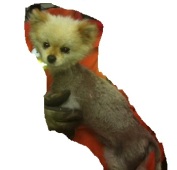 3 responses to “LOOKING FOR A DOG?”

COUNT ON CROSS….
for all your Real Estate needs!